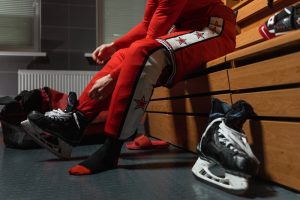 The Stanley Cup Playoffs are in full swing. It’s the second round and only 8 out of the 16 teams that qualified are fighting for the championship. Among those 8 unfortunate teams is the Nashville Predators, who lost their starting goalie due to an ankle injury.

Juuse Saros, the 27-year-old goalie of the Nashville Predators, “felt a pop” when injuring his ankle in the final week of the regular season against the Calgary Flames. Saros is a finalist of the Vezina Trophy, the NHL award given to the best goalie of the regular season. He started 67 games with a 91.8% save percentage, ranking him one of the top goalies in the league. Sources report Saros sustained a high ankle sprain, which would have kept him out of playing for 4 to 6 weeks.

Most common treatment includes immobilization, physical therapy, and P.R.I.C.E.- protection, rest, icing, compression, and elevation. Ankle sprains are diagnosed clinically with pain, swelling, and tenderness over the ligaments. X-rays are used to rule out a fracture. If pain persists, an MRI may be utilized to evaluate for severity and other soft tissue injuries. Most cases are able to return after a course of functional rehabilitation and bracing. If previous activity is not able to be achieved, possible surgical treatment may need to be performed to reconstruct or repair the ligaments.

Unfortunately for Saros and the Predators, they had to rely on less-experienced and developing backup goalies Connor Ingram and David Rittich. The Nashville Predators were unable to muster a win in the first round against the Colorado Avalanche and were eliminated after 4 games, being outscored 21 to 9.