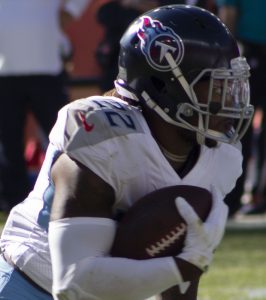 Tennessee Titans running back Derrick Henry suffered a fractured right foot during his game last Sunday versus the Indianapolis Colts. Henry injured his foot during the first quarter of play and continued to play the rest of the game on a fractured foot. It appears that Henry sustained a jones fracture to his right 5th metatarsal. Henry underwent surgery to fix the injured right foot.

What is a jones fracture and how does it heal? A jones fracture is a broken 5th metatarsal bone in the foot. The area in which the fracture occurs has a diminished blood supply which makes it harder to heal. In athletes, surgical correction is usually indicated. An x-ray is the main diagnostic imaging that is used in making the diagnosis. With surgical intervention, athletes can usually return to sport sooner than non-operative treatment.

What is the timetable from surgical treatment of jones fracture to back to activity? Typically the recovery time is somewhere between 6-8 weeks. After surgical fixation, the non-weightbearing period of recovery is shorter than non-operative treatment. This means that the athlete can get into therapy quicker and thus get on the field sooner and safer. At this time if Derrick Henry has a recovery period of about 8 weeks the potential could be there to return if the Titans make the playoffs.