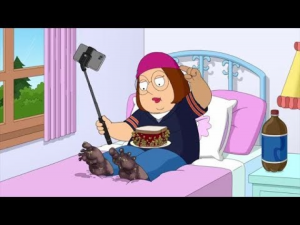 Recently, one of my favorite shows, Family Guy (possibly unintended) helped spread awareness of foot and ankle complications that can occur due to diabetes. In the episode, Meg becomes internet famous for unhealthy eating habits. In one particularly disturbing scene, she livestreams herself swallowing raw bacon and washing it down with half and half. When Meg suddenly collapses shortly after guzzling down two gallons of corn syrup on stage, the family takes her to the hospital where they find out she is now diabetic. She does not change her diet and eventually they show her with gangrenous, black feet. Ultimately, this results in bilateral below knee amputations which means she had both legs amputated.

Although in a slightly crass way, the show was able to depict a cartoon representation of what happens when diabetes harms your lower extremities. The uncontrolled blood sugar levels start to affect circulation to your feet and slowly the small blood vessels start to close down. In the most extreme cases, this results in black, gangrenous feet.

The good news is that CDC has shown that there has been a 65% decline in the incidence of nontraumatic lower extremity amputations over the last 10 years. I surmise this is due to better screening, awareness, and the role that Podiatric Surgeons have played in servicing the diabetic community.

The other good news is that at the end of the episode Meg got a feet transplant from a janitor who had the entire school bleachers fall on him. In real life, she would have had to get prosthetic legs and be trained how to walk again. Check out the episode—you can get a little education and a lot of laughs!