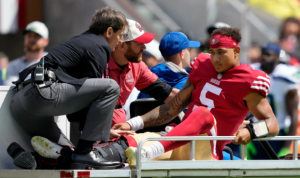 In the 2021 NFL Draft, five of the first fifteen picks were quarterbacks, each representing their teams’ biggest bet on their futures. The San Francisco 49ers drafted Trey Lance with the third overall pick. The 49ers further bet on Lance’s future by naming him the starting quarterback of the 2022 season. Late in the first quarter against the Seattle Seahawks, Lance faked a hand-off and ran up the middle for a short gain. Unfortunately, the play resulted in a fibula fracture and ligament disruption to his right ankle. Lance was placed on the season-ending injury reserve and had surgery to repair his injuries the following day.

A broken ankle is a fracture or multiple fractures of one or more of three bones in the ankle joint: the tibia (shinbone), the fibula (outer bone of the lower leg), and the talus. There are ligaments within the ankle joint that connect bone to bone to provide stability of the joints. They are commonly injured in the case of ankle sprains. They can also be injured in connection with ankle fractures. The syndesmosis ligament connects the tibia to the fibula. This needs to be repaired to prevent instability of the ankle joint. In the case of Trey Lance, he fractured his fibula and tore his syndesmotic ligament.

Broken ankles are usually caused by a rotational injury, where the ankle becomes twisted, turned or rolled while walking or running, such as during sports activity. But they can also be caused by a high-force impact, such as from a fall or automobile collision. The most common symptoms of an ankle fracture are pain and swelling. Patient’s are usually unable to bear weight on the foot or ankle.

X-rays are usually required to determine whether there is a broken bone. Other radiology imaging, such as a CT scan or MRI, may be needed to determine the full scope of the injury.
There are several different types of ankle breaks, and not all require surgery. Early and correct intervention is the key to preserving the ankle joint over the long term.
Treatment is based on the alignment of the bones and the stability of the ankle joint. The goal is to have the bones heal as closely to perfect as possible so as to prevent any residual instability or malalignment of the bone. A malalignment of as little as two millimeters in the ankle joint can lead to arthritis. It is much easier to fix a fracture than to treat arthritis in the future. Certain mild ankle breaks (stable and with no displacement) can be treated non-surgically with a splint, short leg cast, or other protective device such as a walking boot.
For more serious fractures in which bones or bone fragments are misaligned, surgical intervention is necessary to prevent improper healing (malunion) that would impede proper movement in the ankle and possibly lead to other complications.

It takes about six weeks for bones to heal. It may take longer for ligaments or other soft tissues to heal as well. After surgery, patients are typically not weight bearing for 4 to 6 weeks until the bone heals. Patients are placed on a pain management protocol that minimizes their need for opioid medications. For the first couple of weeks, patients are in a splint. After 10 to 14 days, the sutures are removed and patients are typically placed into a removable boot. This allows patients to start moving the ankle and to shower. At the six-week visit, X-rays are obtained. Assuming the bone is healed well, patients are then allowed to start weight bearing and to begin physical therapy. Patients will generally have six weeks of therapy or more if required.

In the case of Trey Lance, he will be out for the season and hopefully be back as starting quarterback for the San Francisco 49ers for the 2023-2024 season.