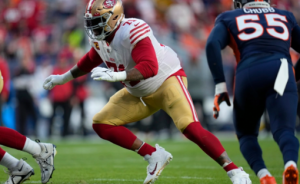 Williams, regarded as arguably the best left tackle in the NFL, was injured when he was blocking Broncos defensive end Bradley Chubb, and Denver defensive lineman D.J. Jones was blocked to the ground and fell across Williams’ right leg. Quarterback Jimmy Garoppolo stepped out of the end zone for a safety on the play.

Most common treatment includes immobilization, physical therapy and P.R.I.C.E.- protection, rest, icing, compression, and elevation. Ankle sprains are diagnosed clinically with pain, swelling, and tenderness over the ligaments. X-rays are used to rule out a fracture. If pain persists, an MRI may be utilized to evaluate for severity and other soft tissue injury. Most cases are able to return after a course of functional rehabilitation and bracing. If previous activity is not able to be achieved, possible surgical treatment may need to be performed to reconstruct or repair the ligaments.

A nine-time Pro Bowler, the 34-year-old Williams is in his third season with the 49ers and is coming off an All-Pro campaign. Williams was voted No. 14 in the NFL Network’s annual Top 100 Players, the highest ranking ever achieved by an offensive lineman. As of now with his high ankle sprain he is anticipated to be out between four and six weeks. We wish him a safe and speedy recovery.