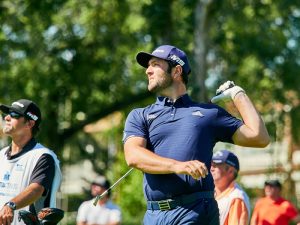 Recent US Open champion Jon Rahm gives insight to his medical history that affects how he swings the golf club while winning major championships. Rahm revealed prior to the Open Championship, that he was born with a clubfoot. He explained that his right foot was, as he described it, “90 degrees turned inside and basically upside-down”

Right after birth, it was noted that Rahm’s right foot had a clubfoot deformity and began treatment with serial casting. The lasting effects include having a shorter right lower leg and doesn’t have the stability and mobility of his right ankle. These limitations caused Rahm to create a shorter swing than normal. He learned at an early age to be more efficient with his swing to create the consistency he needed to become one of the best golfers in the world.

How common is clubfoot? 1 in every 1000 live births will have a clubfoot. It is the most common congenital foot deformity. What is the treatment? Most cases of clubfoot are treated non surgically with serial casting and bracing in the first few years of life. If the clubfoot is not fully corrected with nonsurgical treatment, there may be a need for reconstruction surgery to create a more functional foot.

With whatever treatment is necessary, normal foot function is able to be achieved. Jon Rahm did not let that hold him back from being one of the best golfers in the world. The team at Brucato Foot and Ankle Surgery wishes Jon Rahm good luck in the rest of the PGA tour.